The facility was established in 2001 by UCI faculty Ellen Druffel, John Southon, and Susan Trumbore with a $2 million gift from the W. M. Keck Foundation to advance our understanding of the carbon cycle and its role in the climate system. 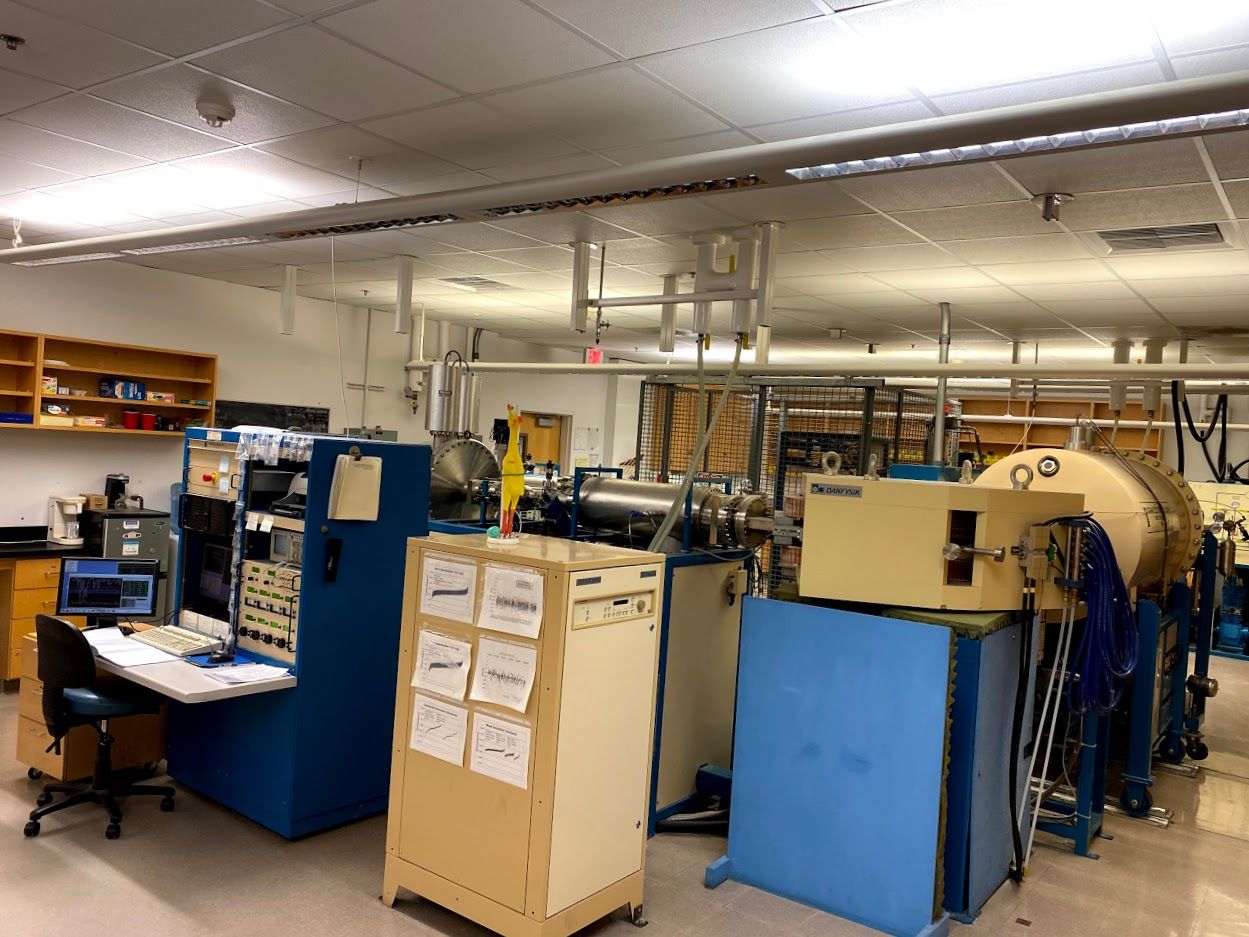 The KCCAMS accelerator and sample preparation laboratory were operated for about one year in a temporary location in Reines Hall. In June/July 2003, the AMS and lab were moved to the newly completed Earth System Science building (Croul Hall). It took four people just four days to dismantle the AMS system. Nine days were required to move the parts to the new location, re-align and re-cable the system, re-establish vacuum, and bring it back into operation.

Sample throughput ramped up to 500 unknowns per month, of which about 2/3 are processed in the KCCAMS sample preparation laboratory. Best blanks are 56,000 14C years on graphitized coal and 58,000 years on calcite. Typical measurement precision is 2-3 per mil. Occasionally, precision is lower ( 4-5 per mil), possibly because the emittances of intense beams from the source are approaching the acceptance limit of the accelerator. The system runs unattended overnight, and the inevitable hardware problems that do occur typically result in little downtime. 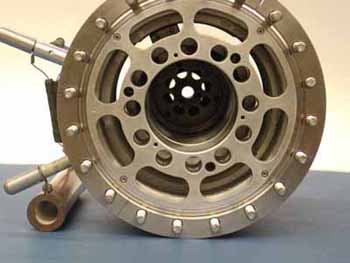 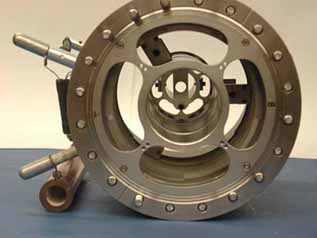 We have rebuilt the ion source extractor assembly for improved reliability, ease of cleaning (all stainless steel construction), and improved source pumping. Tests showed that the pumping speed between the source and the downstream cryopump had doubled. (See how clear are the new assembler in comparison with old one).

We anticipate further improvements in the near future when we replace the present 4” ID preacceleration tube with a new gap lens assembly based on a large Ceramaseal insulator with 5” ID internal shield. 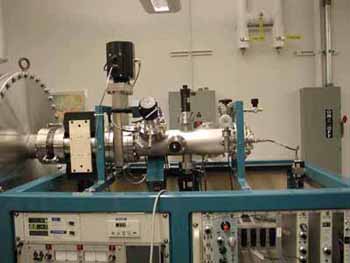 We have modified the detector beamline to place the detector closer to the final waist than in NEC’s original design. This allows us to use 10 x 10 mm photodiodes (Hamamatsu S3590-02, $150) in place of larger Si particle detectors, and the smaller beam size will also facilitate the planned installation of a gas detector. 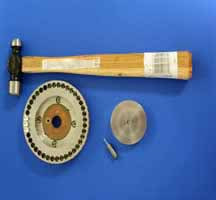 Dissatisfaction with the NEC sample holders led us to design an alternative sample wheel.

We have developed an experimental 40-sample wheel design which is a bolt-in substitute for the NEC wheel, but uses 1/2 inch (1.27cm) long by 1/4 inch (.63cm) diameter cylindrical sample holders held in place by spring-loaded ball inserts in the wheel. Sample holders are now loaded with graphite from the front and are large enough to be labeled, and the loading process has been speeded up.

The stainless and copper design is less prone to sparking than NEC’s Al wheels, which require very careful cleaning to remove oxide/hydroxide coatings. 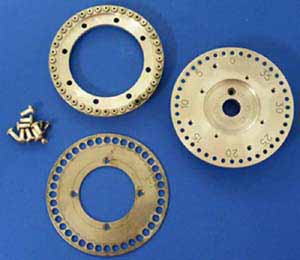 We still use the NEC wheels, when is required. However, we noticed that during warmup the ion source was oftenn unstable. Initially, some of this instability was associated with the poor contact between the aluminun sample wheel and a spring-loaded cathode voltage feedthrough. A stainless steel face plate on the wheel was manufactured to reduced this problem. Later on, changes in cleaning procedures avoid entirely the sparking problems. 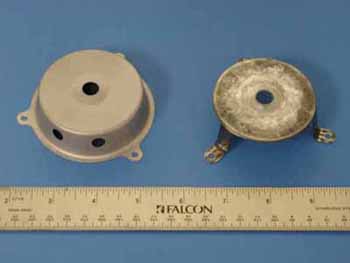 In the standard NEC design, the volume between the ionizer and sample wheel is relatively enclosed. To increase beam current output we cut back the Cs focus electrode to assist local pumping, redUC Irvineng the electrode to a plate standing on three narrow legs. (Modification first implemented at Arizona). 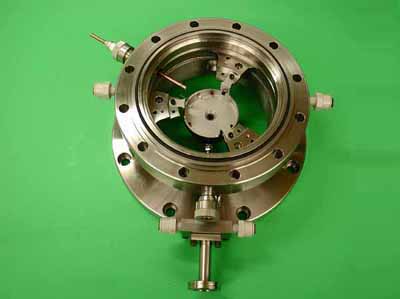 Funding has been obtained from NSF to work with NEC, Arizona and Woods Hole on further source development. A complete new Source body has been purchased from NEC and was modified for improved cooling, provision of a cacuum-insulated Cs feed line, and changes to the CS+ and negative geometries.

The new body was installed in December and immediately showed a major impact on the stability of the source and on sample throughput. The new designed has also reduced maintenance time. Today the typical turn-on time after a sample wheel change is under an hour, and a complete source maintenance and bakeout takes about 6 h. C – outputs are 100-150 microamps and measurement of a wheel of 40 samples to 2-3 per mil precision takes ~ 20 h. 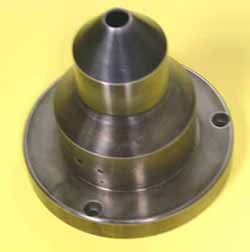 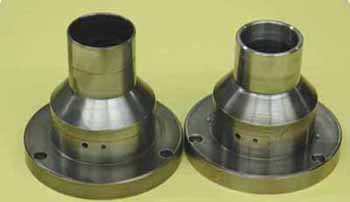 Electrons emitted thermionically from the ionizer at high temperatures can flow into the extraction gap and sputter positive ions from the extractor snout and collimator. These positive ions then travel back upstream and strike the source. Under some conditions, this process becomes uncontrollable until the source is taken apart and cleaned. We opened the extrator gap on three different arrangements, until Roger Loger (NEC) provided a new extractor in the form of a large-bore tube (last design on the right) which we fitted with a shortened internal collimator assembly. This has alleviated the problem by redUC Irvineng the electric field in the ionizer aperture. 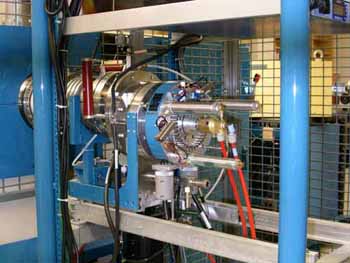 A track system has been built into the high voltage rack to support the source, using filing cabinet slides – longer versions of the slides used to support the sample changer during cathode wheel changes. This allows the entire source body, or the sample changer plus isolation valve, to be rolled back for easy in-place servicing, with most of the electrical, pneumatic and cooling connections left in place. One person can perform a complete source maintenance in 2 hours. 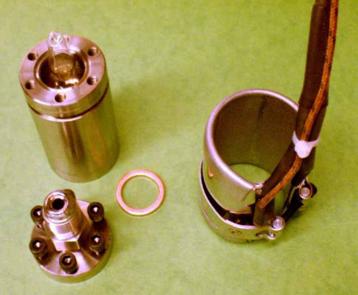 The spectrometer was delivered in June 2002 but acceptance tests were not performed until October. Delays included a 6 week period of gross ion source instability that we traced to an electrical short between the Cs line heater and a heat-shield (NEC design).

To avoid future problems and simplify and speed up Cs replenishment, the Cs oven was complete redesigned. The new unit, based on a Laurence Livermore Cs oven design, is sealed with a mini-Conflat. It accepts full Cs ampoules that are cracked under Ar and placed directly upright in the oven. It is not necessary to heat and pour out the Cs, as the NEC design. This shorter oven is also less likely to act as cannon when water is used to clean out residual Cs.